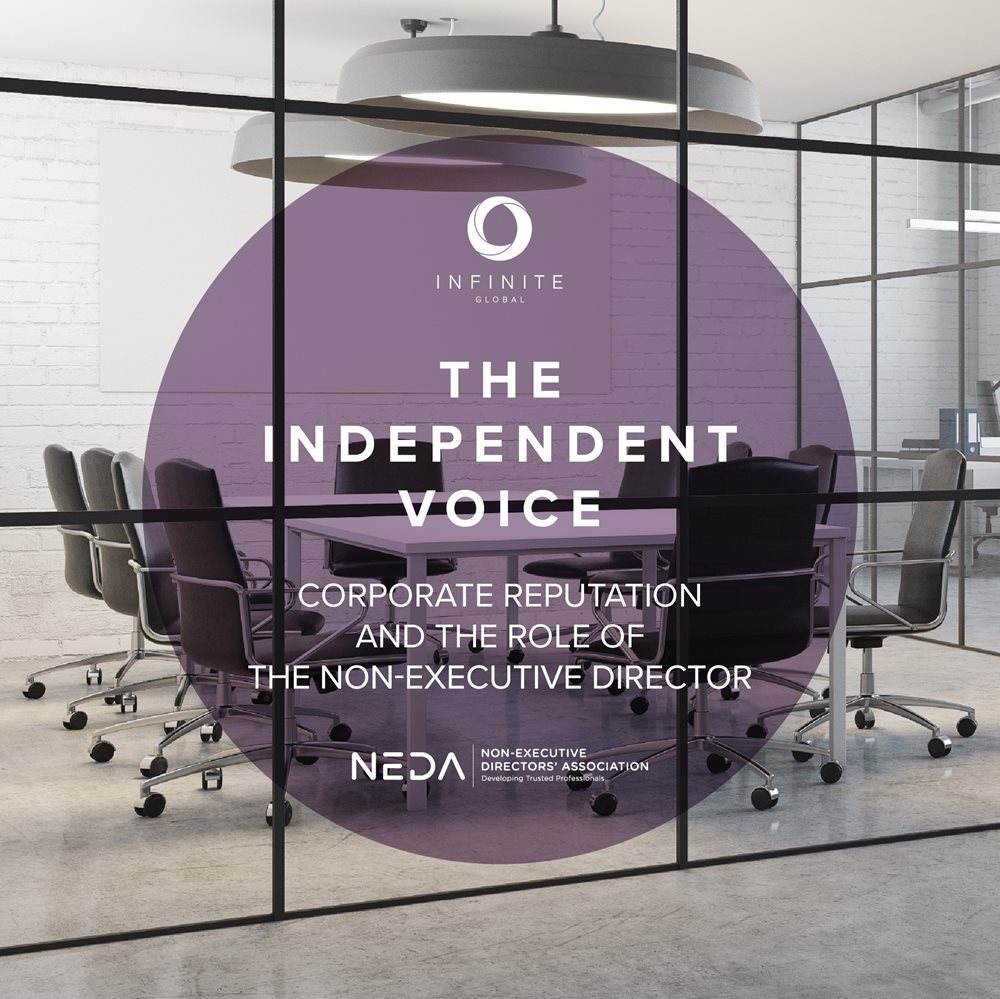 Based on a survey of NEDA members (including both current and aspiring NEDs), the report – ‘The Independent Voice: Corporate Reputation and the Role of the Non-Executive Director’ – found that a full quarter (25%) of NED survey respondents stated that corporate reputation was rarely on the agenda at board meetings. Further, corporate reputation ranked as only the sixth most important business issue (out of eight options) overall in organisations, behind HR and Governance.

Despite this, NEDs in the survey were almost unanimous (90%) in the view that media, public and stakeholder scrutiny of business had increased in the last 5-10 years. Indeed, few can dismiss the swelling tide of media, public and stakeholder scrutiny, growing focus on corporate transparency and trust, and a general lack of boardroom focus on reputational issues thus far, according to the report.

The role of the NED
The NED, with their ‘independent’ voice within organisations, has a clear role to play in this landscape – and that role has not yet been fully realised, the report indicates. More specifically:

Scott Addison, UK Board Director at Infinite Global, commented:
“The calls are growing ever louder for corporate reputation to be given a more prominent role in boardroom discussions, but until now the role and remit of the NED in reputation management has too often gone under the radar.

“Media, public and other stakeholder scrutiny of business is increasing. In this climate, and especially in times of reputational crisis, there is a real risk that companies retreat into the corporate bunker. The NED has a clear role to play in bringing an independent perspective to reputational issues, helping to challenge the status quo. Companies must leverage this clearly under-utilised asset wherever possible.

“While far from definitive, we do hope that this initial research helps to start a proper debate about these issues, and to drive greater collaboration between communications professionals, the NED community and boards. We welcome the opportunity to work with these and other corporate stakeholders to maximise on the potential value NEDs can bring to reputation management.”

“Fundamentally, NEDs are in post to hold the Executive Team to account. While the CEO and Executive Team have day to day responsibility for managing reputational risks, the NED has a pivotal – but as yet not fully realised – role in the active management of company reputation given the experience they can bring from a range of other organisations. The NED needs to advise, support and challenge boards to help protect and enhance corporate reputation, but they must be empowered to do so balancing their experience with on-going personal development, as well as support from other board members.

“This new research is timely, and a welcome restatement of the value that NEDs bring to the companies they serve. By engaging more deeply with communications professionals, I am hopeful that we can both raise awareness of the role of NEDs in reputation management whilst also encouraging communications professionals themselves to plan their own role as a future contemporary NED.”

About NEDA
The Non‐Executive Directors’ Association (“NEDA”) is the leading independent members association dedicated to NEDs. NEDA promotes and supports the day to day needs of NEDs throughout their life-cycle of activity and at all levels – aspiring, new and experienced.
NEDA was established in 2007 to represent the interests of Non-Executive Directors and provides  a range of training, education, mentoring and advisory services to both individuals and organisations, across all sectors – corporate, not-for-profit and public.   NEDA’s aim is to help build better boards using bespoke NED Development and Board Performance Evaluation Programmes.