Call in the administrators – report from Infinite Global 2018

This report from Infinite Global explores how insolvencies, particularly administrations, play out in the press, and reflects on the communications and PR lessons for professionals and corporates when dealing with the media in an insolvency or restructuring scenario.

The start of 2018 was bookended by two of the most high-profile insolvency cases of recent history.

Before Christmas 2017, we saw Toys “R” Us file for bankruptcy in the US, resulting in a significant restructure of the UK business – through a Creditors Voluntary Arrangement – and the prospective closure of around a quarter of its stores and the shedding of thousands of jobs.

Then, as the new year dawned, we were treated to the swift and sudden collapse of contractor and support services company Carillion – which fell into liquidation as soon as it became clear that the business and its contracts were not viable prospects for potential buyers.

Following the financial crisis, insolvencies have been consistently trending downwards year-on-year, but these two high profile cases may indicate the beginnings of an uptick.

Very broadly, insolvencies divide into two key types: Administration and Liquidation. Both of these processes are incredibly complex, and it is part of the role of the insolvency PR professional to help communicate this complexity to media and public stakeholders. In layman’s terms an Administration halts any legal action against a company (i.e. action seeking to recover debts) and seeks to turn the company around via a sale of the business or assets, or other restructuring strategy. A liquidation, meanwhile, means that a company has no future and the role of the appointed insolvency practitioner is to extract as much value from the company and its business as possible.

Again, turning to the Carillion example (according to media monitoring service Factiva) by the end of January the company had accrued more media hits in 2018 alone than in any of the previous five years.

This casts into sharp relief the important role communications and PR plays during any insolvency process and for all stakeholders involved: from insolvency practitioners, to prospective investors, to businesses navigating through a restructuring process themselves.

We have analysed three ‘stock phrases’ that media traditionally use in their reporting on Administrations – sometimes for statutory purposes – and tracked that against official insolvency statistics for the past five years. 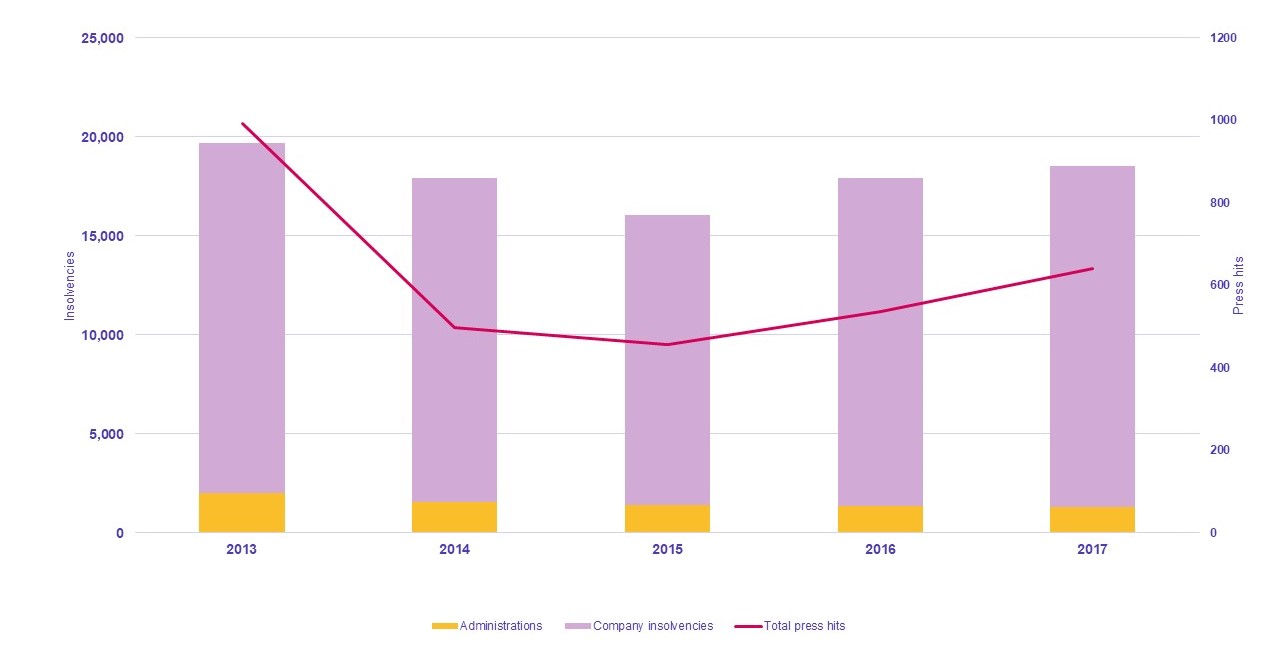 Firstly, this shows that media coverage of administrations has broadly tracked the overall downturn in insolvencies. Secondly, we can clearly see the administrations that have grabbed the media’s attention and begin to take some lessons for both companies and insolvency practitioners.

According to the data tracked by Factiva, there are five clear peaks in media activity between 2013 and 2018. A peak has been defined as more than 100 media hits in a given month. 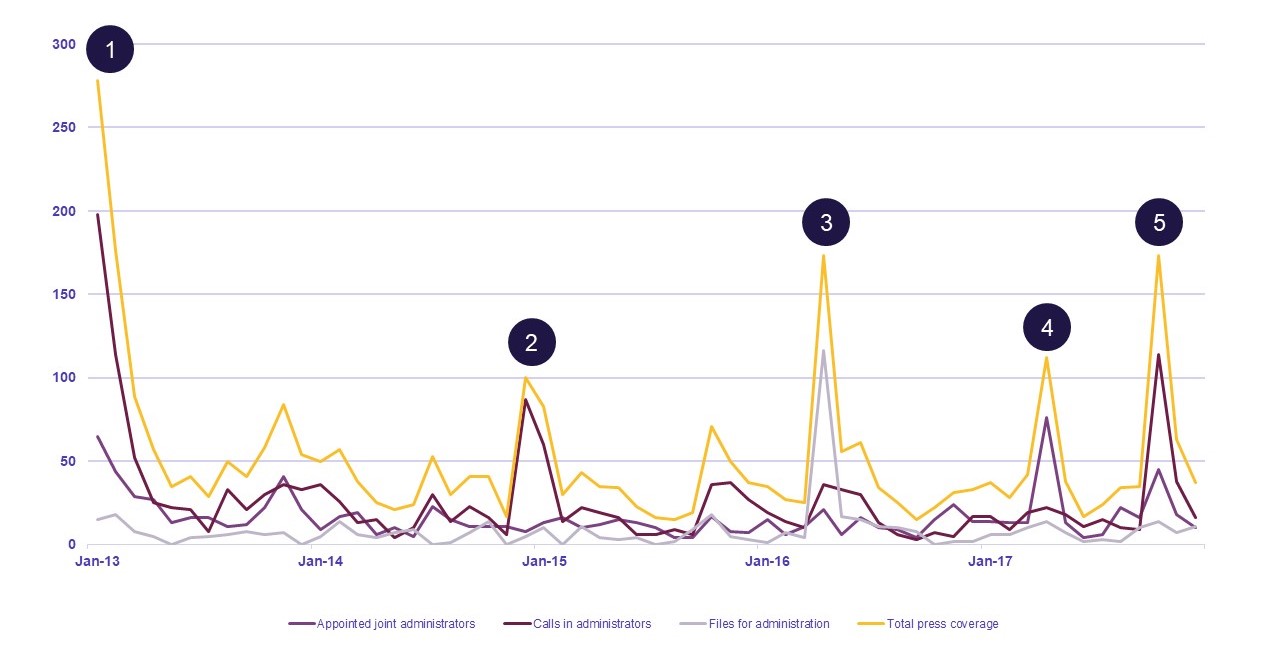 HMV files for administration in January 2013 resulting in coverage across the UK national press and trade publications, swiftly followed by the collapse video rental business Blockbuster. The Telegraph ran the official announcement from HMV – here – with reporters Graham Ruddick and James Quinn continuing to follow the story and linking the two stories as a “brutal week for the high street”.

On Christmas day 2014 City Link files for administration, with the BBC reporting that even on Christmas Eve workers were unaware of what was to come. Mick Cash, the general secretary of the RMT union waded into the debate, branding the scenario “a disgrace”.

In April 2016, retailer BHS files for administration, kicking off an investigation by the Pensions Regulator into the liability of former owner Sir Philip Green for the company’s pension deficit of £571m. The Guardian reported on the collapse being the biggest seen in the retail industry since Woolworths in 2008, and connected the pension issue with that of Tata Steel which was receiving considerable attention from government.

Insolvencies, and particularly administrations, are often seized upon by local / regional news outlets and the influence of these publications in the stakeholder management process should not be underestimated. In April 2017 two companies which ran 36 Burger King franchises were forced to call into administrators, threatening thousands of jobs. A flood of regional reporting commenced, with papers from Yorkshire to Leighton Buzzard running pieces.

In October 2017 airline operator Monarch filed for bankruptcy, with CNN reporting it as the “biggest ever” airline failure. Thousands of holidaymakers were stranded abroad as flights were cancelled with immediate effect. The government had to step in and work with the Civil Aviation Authority to charter replacement flights to bring travellers home.

These peaks in media reporting provide several lessons to bear in mind when assessing communication strategies during and after an administration (and indeed other forms of insolvency).

Of course, the very notion of an administration (as opposed to other types of insolvency) rests on the premise that there is hope for the business in question. There exists the possibility that the brand can, in some shape or form, be brought back from financial distress and on to firmer economic ground.

The role of insolvency communications in this scenario is, then, very often to ensure that the reputation, brand value and goodwill of the business is protected – so as to encourage investment or prepare the ground for a future relaunch. Managing the message, ensuring factual reportage and mitigating any reputational risk caused by the insolvency is critical; for the company in administration, the responsible insolvency practitioners, and potential investors.

For further information, get in touch or click here to find out more about our crisis communications services.