The energy industry has had a pretty tough time of it in the media of late. Some of it self-inflicted.

As wholesale prices sky-rocketed at the end of 2021 (Ofgem’s data viz shows a worrying and very clear trend on this), driven partly by environmental factors and partly by economic issues (not least supply chain resilience and Brexit bottlenecks) many consumers were already feeling aggrieved. Higher bills (which show no sign of improvement in the near term) and the collapse of many alternative providers who had positioned themselves as offering cheaper and more flexible deals than the big players, has created a real pain point for customers.

This all makes for a pretty tricky landscape in terms of communications and brand building.

Leading from the front, the challenger brand had been vocal in calling for government intervention to improve the market for consumers and deliver regulatory reform. Just a couple of weeks later and suddenly the brand didn’t look to be quite the customer champion it first appeared.

A piece of email marketing from SSE Energy, which OVO took over back in January 2020, put forward a number of light-hearted ideas as to how its customers could save electricity and reduce their bills. Examples ranged from doing star jumps to cuddling up to a pet.

You can (just about) understand the thinking here. This is the kind of content that can, done well, perform incredibly well on social media and you can almost hear the marketing team brainstorming how to drive engagement and get customers posting photos with their pets and exercising all in the name of, on the face of it, energy efficiency and, by extension, climate change. It could even have gone ‘viral’…

But boy the tone and timing was wrong.

Content may still be King, but context is certainly Queen. OVO were summarily bashed, not least in the press, for appearing hopelessly out of touch with customers many of whom were facing dire straits given ongoing price rises.

Take a look at the media coverage, to say nothing of the social media debate, and the depth of the hole OVO dug for itself is plain to see.

The almost 500 mentions of OVO in the media in January was a significant spike in the brand’s overall media footprint compared to the preceding three months.

A huge portion of this coverage concerned the cuddling pets gaffe which, along with the subsequent apology, far outweighed important brand messages such as cheap energy and climate change in terms of overall press mentions in the period.

Things went from bad to worse, too, when it was confirmed just a few days after ‘cuddle-gate’ that OVO would be making swingeing redundancies aligned with its takeover of SSE, provoking a fierce union backlash and associated coverage of the resulting job losses. 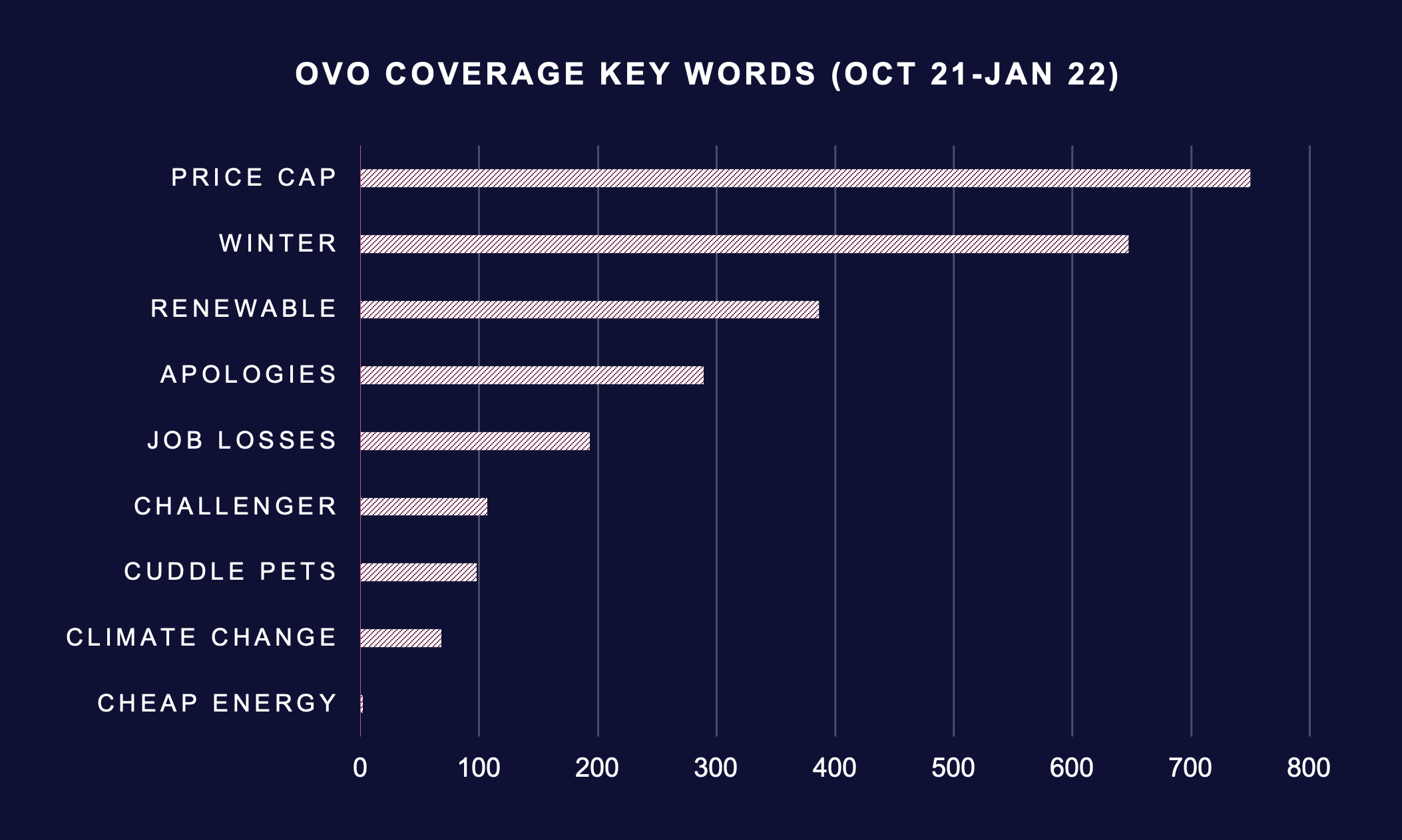 For the marketing team, its energy saving campaign idea had gone viral, for all the wrong reasons.

And, while supposedly ‘negative’ press coverage can in some cases be a boon to brand awareness (just look at the position some brands take in terms of deliberately provocative advertising campaigns which draw the ire of the regulator), in this case the only real option for OVO was to fall on its sword.

The crisis playbook will have swiftly been dusted off and, fair play to them, the damage limitation was about as effective as it is possible to be in such a scenario. The apology was clear, heartfelt and came swiftly. Importantly, it came from the CEO who was both visible and accessible.

As with any crisis communications plan, the work now will be to focus on reputation repair. Clearly OVO’s PR machine will go into overdrive to regain brand trust and bring the debate back around to where it hoped to be focusing at the start of the year: delivering for customers and contributing to reform of the market it has previously called not ‘fit for purpose’.

It will not be an easy journey. It wouldn’t be for any energy brand at such an acute moment of public concern around living costs and climate change.

Even in the immediate aftermath of OVO’s very public empathy crisis the lessons have seemingly not been learned, with Eon chastised less than a week later for sending promotional socks to thousands of customers.

The reputation issues facing the industry go deeper of course than failed marketing stunts, particularly on the issue of climate change.

PWC’s most recent CEO survey for example found that only 13% of CEOs have targets relating to greenhouse gas emissions as part of their bonus or long-term incentive plan. The energy industry, for whom climate change is of course a more direct issue, fares better – with around 27% of CEOs having linked targets. But, on the flip side, that still means that around three quarters of energy company CEOs have no greenhouse gas emissions targets linked to their pay packets.

Many will find this astonishing.

Looking ahead, then, the industry faces real challenges in terms of its engagement with the general public, role in market reform, visibility on key issues and the journey of transitioning to net zero.

Creative marketing and PR is vital in this process. Setbacks might happen and, if they do, brands can take a leaf from OVO’s book in terms of communicating swiftly and decisively.

But whether it’s gimmick-gone-wrong, executive pay, or action on climate change, what is clear is that the media and public scrutiny of energy firms is going the same way as wholesale prices. Upwards.

*All media data gathered via Cision