In just a few days’ time, the world will descend on Sharm-el-Sheikh, Egypt, for COP27.

Another set of deliberations will begin around how the world can come together to address the climate emergency and its effects.

The media, and communications more generally, has a critical role to play in this process.

In the context of the volatile economic climate we find ourselves in there is a real risk that the climate change discourse becomes subsumed by issues perceived to be more ‘immediate’ threats.

This is of course understandable. But it does pose a significant challenge for communicators seeking to ensure messages on climate change cut through the noise, both with end-audiences and also journalists (more on that here).

COP26 and climate change in the UK nationals

To analyse the extent of this challenge, we took a look at the extent to which a selection of ‘mainstream’ and well-respected news outlets in the UK reported on Climate Change over the past couple of years.

We reviewed The BBC, Sky News, ITV, Reuters, The Guardian, The Financial Times, The Times, The Telegraph, The Independent and City AM and tracked all articles mentioning the terms “climate change” or “Net Zero” (and their synonyms). 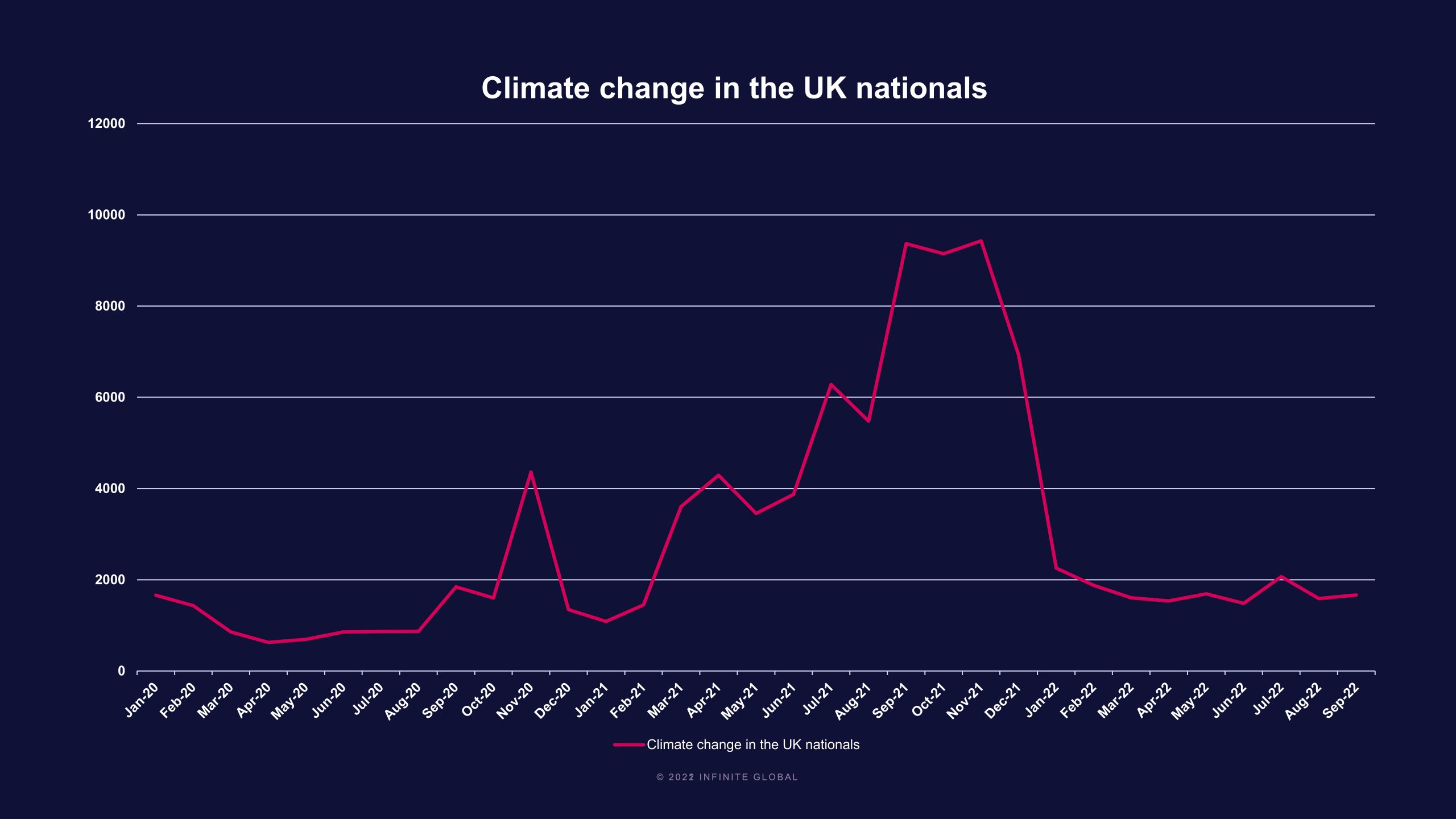 What becomes clear is that there was a significant ramping up of climate change reporting in the run up to COP26.

In fact, between Q1 and Q4 2021 the volume of media reports including the terms climate change and net-zero increased a whopping 315%.

Climate change dominated the news agenda to a large extent, fuelled at least in part by the post-pandemic debate around the return to work, travel, localism and more ecologically responsible living.

This highlights a fundamental communications issue.

Climate change is not just for COP(s).

In order for tangible progress to be made it must be kept high on (if not top of) the media’s agenda, and firmly in the minds of those who can affect change.

That’s everyone. From multinational corporates to political leaders to individual households.

Ahead of COP27, we have not seen anywhere near the same level of a ramping up of reporting as there was in advance of COP26.

Partly, of course, the huge volume of coverage in 2021 in the UK press was a good deal to do with COP26 being held in the UK. There was buzz and excitement about the fact that the UK would play a pivotal role in facilitating a new deal on climate change.

One could argue, though, that the subsequent drop off in reporting demonstrates just how much more needs to be done to ensure climate change, and action on it, continues to resonate.

Swimming against the tide

In face of the disruptive, in some cases horrific, events of the past year, though, it is understandable that the media’s eye has been elsewhere.

We looked at four core trends which have dominated the airwaves and front pages over recent months to see just what has replaced those masses of reports on climate change in 2021.

Rising energy bills are a concern for everyone. Household finances are under real pressure as wholesale prices surge (albeit we have seen indications of a return to normality in some commodities such as gas).

This was reflected in the mainstream media reporting, with coverage of issues relating to energy prices creeping up essentially in line with the decline in reporting on climate change after COP26.

Indeed, in August this year reporting relating to energy prices overtook climate change reporting for the first time in the period analysed.

This comparison is particularly interesting of course because the two issues are so intertwined.

Renewables are already cheaper on paper than fossil fuels, and while IEA research has shown installation costs for solar and wind increased (reversing a long term trend) in the last year, this pales in comparison to acute rises in fossil fuel prices.

The challenge therefore is capacity building, storage and other associated infrastructure, as well as a supportive global and domestic policy landscape (click here to find out more about our pro bono partner The Climate Parliament and their mission in this regard).

The communications challenge here is complex, particularly for the established players in the energy industry who themselves are playing and will play a critical role in the transformation to a low carbon economy and the transition to ubiquitous ‘clean’ energy. There is a real need to demonstrate understanding of and support for today’s consumer in the context of our current reliance on fossil fuels (which currently supply around 80% of the world’s energy) – the lights must be kept on – while investing in and building towards global Net Zero.

At the root of the energy crisis of course was and is Russia’s invasion of Ukraine.

This, ‘black swan’ event, more so than any of the other factors we analysed directly reflected the decline of climate change reporting, mirroring it almost exactly with an acute rise in early 2022.

It is interesting to note that the rise in prevelance of reporting on Ukraine more or less correlated to a flattening out of the decline of reporting on climate change. This perhaps signals a growing recognition of the inherent risks for a globally connected economy powered by fossil fuels dominated by particular nation states.

The linkage between Europe’s reliance on Russian fossil fuels and the urgency of progress towards the transition to renewable energy cannot be overstated. Indeed, the EU plans for renewables to make up 45% of its energy mix by 2030 as part of its wider strategy to attain energy independence from Russia.

Again, though, the data shows reporting on Ukraine has itself begun to tail off, partly as a result of ongoing domestic issues.

We’d be forgiven for assuming the seemingly constant dramas emanating from Downing Street – three Prime Ministers in three months now – would be all consuming, with SW1 acting as a kind of media black hole pulling all and sundry into its vortex…

Well, all is not actually as it seems. We looked specifically the terms “Conservative party”, “Tory party”, “Boris Johnson”, “Liz Truss” and “Rishi Sunak” and, in fact, media reporting by the outlets we looked at has stayed more less steady over the past two years.

What has changed, though is inflation.

There has been a steady increase of media stories mentioning inflation, particularly since Q4 2021. 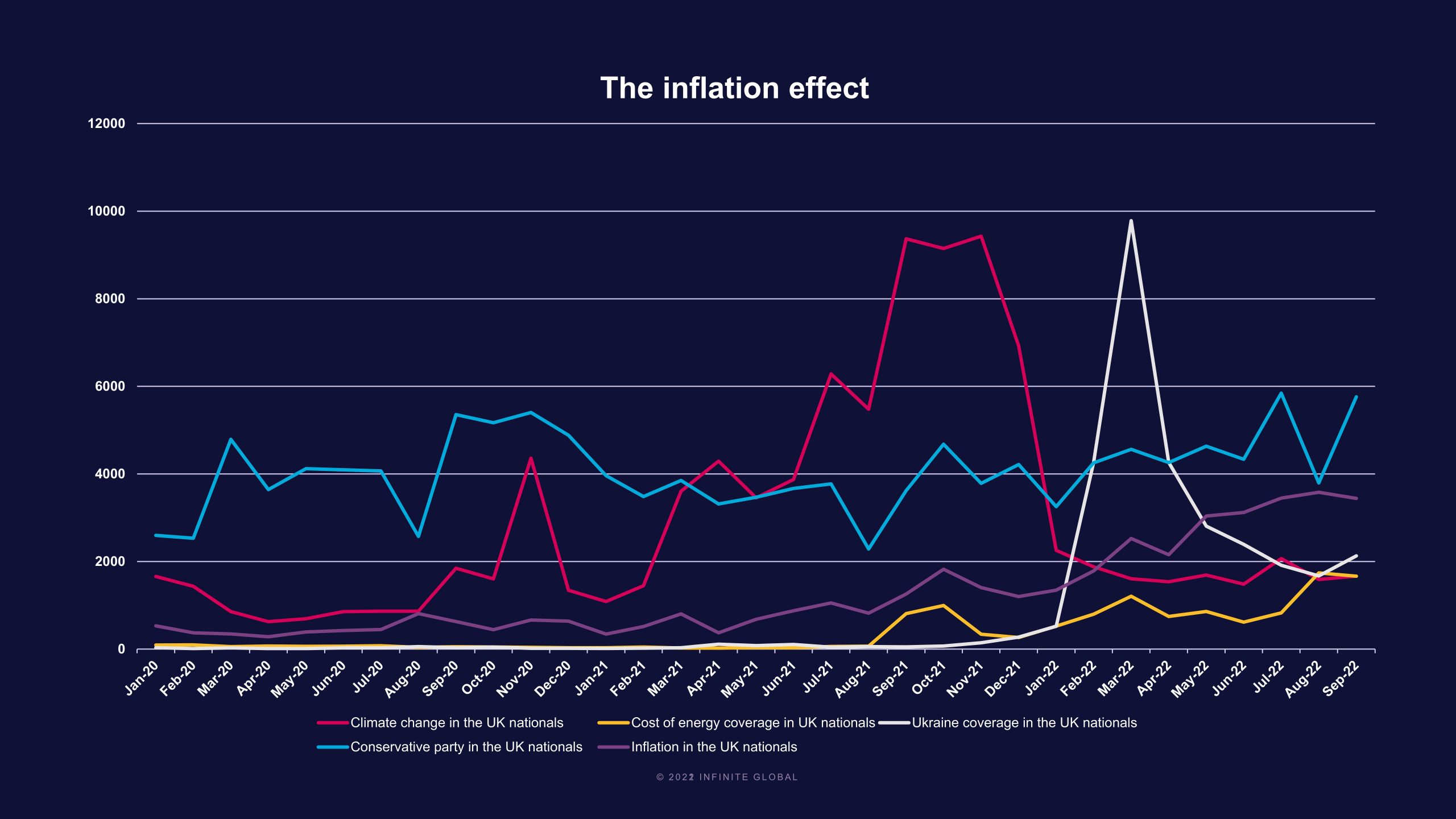 This brings us back around to the underlying point here.

In competing with current economic conditions, domestic political instability, and the global geopolitical environment, the climate change story faces an uphill battle to get on to the agenda and cut through the noise.

The hosting of COP26 in the UK shows just how important it is for media stories to be both timely and relatable. This was the classic ‘hook’ that we PR practitioners talk about a lot. If you wanted to sell a story to a journalist on climate change, clearly you wanted to be riding the crest of the wave towards COP26.

One could argue that the comparative dearth of climate stories now may make those that do break through more noticeable, but the challenge will be getting it on to an editor’s desk in the first place given the increasing competition for attention.

But this is a challenge that must be overcome if the climate message is to succeed.

Gloves come off in ESG spat